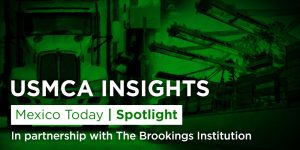 USMCA by the numbers:

•During the first nine months of 2022, trade in goods among the three North American countries surpassed $3 million per minute

•Mexico is the largest importer of corn in the world. Over 92% of its corn imports come from the United States.

•During 2021, U.S. corn exports to Mexico supported 48,000 direct and indirect jobs in the U.S. Corn imports play a key role in Mexico’s food security, as they are the primary feedstock for the country’s beef, pork, and poultry industries.

•In 2020, Canada became the world’s 7th largest exporter of cars in the world with $31.8 billion in sales. From 2019 to 2020, the fastest growing car export markets for Canada were China and Mexico with 159% and 58% increases, respectively.

A year in data:

•Trade reaching new heights. Mexico and Canada are the second- and third-largest export markets for the U.S. Together, they account for a third of total U.S. goods exports. 50% of North America’s trade is now intra-regional.

•North America’s economic weight in the world. North America accounts for almost a third of global GDP—60% larger than that of the European Union and 11 times bigger than the countries in Mercosur. The combined GDP of North America has more than doubled over the past two decades.

Teamwork for the World Cup:

•North America will host the next World Cup in 2026! With plenty of beer (3 out of 10 beers exported globally come from Mexico), and authentic fútbol culture, 16 cities in Canada, Mexico, and the United States will host millions of fans for the largest tournament in the sport’s history. Reaching for a snack while streaming the final games in Qatar? The ingredients likely originated from across North America

•Bun from Mexico City, made with wheat from Saskatchewan

•Hot sauce from Louisiana, made with chiles from Sinaloa

•Bacon from Manitoba, made with pork from Jalisco

•Onions from Chihuahua and California

•Guacamole from the U.S., made with avocados from Michoacán

•Meat patty from Texas, made with beef from Alberta

See a detailed review of all trade-related disputes by visiting the USMCA Tracker.

•GMO corn. On December 1, 2022, Mexico’s Secretary of Economy Raquel Buenrostro met with her U.S. counterpart Katherine Tai to discuss concerns over a 2020 presidential decree issued by Andrés Manuel López Obrador (AMLO) that would phase out imports of genetically modified corn to Mexico. In November, U.S. Agriculture Secretary Tom Vilsack met with AMLO to address U.S. concerns and warned that the U.S. government was considering all options, including an official panel dispute under USMCA rules if consultations with Mexico didn’t lead to an “acceptable resolution” of the issue. On November 29, 2022, AMLO signaled he was open to excluding yellow corn used for livestock from the GMO ban.

•Did you know? 9 out of 10 corn cobs that Mexico imports come from the United States.

•Car-content rules. On December 8, 2022, a panel sided with Mexico and Canada over the U.S. on the interpretation of regional trade rules in the auto industry. Both Canada and Mexico believe that more auto parts produced within the trade area should qualify for duty-free shipping than the United States would like to allow. The panel’s final report on the matter is expected to be released within 30 days of the November 14 preliminary ruling.

•Forging North America’s future. This book compiled by Alan Bersin and Tom Long highlights areas where North American cooperation is needed and/or could offer substantial benefit. In 16 essays written by subject-matter experts, the book addresses shared challenges in the North American agenda, such as migration, energy, trade, borders, workforce development, and cybersecurity, among others. The final section of the book offers insightful commentary on North America in terms of global value chains, regional defense, and relations with China.

•Tough work ahead to unlock USMCA’s potential. In an article for the Wilson Center, John Burzawa, Sophie Egar, and Earl Anthony Wayne provide a summary of USMCA’s third year and highlight the region’s main challenges. They underscore key areas for action, including the creation of a Digital Trade Council and a trilateral committee on public outreach to help prepare for USMCA’s first “sunset” review during 2025-26.

* USMCA Insights is a newsletter that covers North American trade from a variety of angles. The newsletter is produced by the Brookings Institutions’ USMCA Initiative which works to measure the effectiveness and implementation of the United States-Mexico-Canada Agreement (USMCA) which came into effect in 2020. Something else catch your eye?  Email Diego Marroquín: dmarroquin@brookings.edu​

Opinion | Tijuana’s Extortion and Why It Matters for Semiconductors