TREND: In January and February 2022, Mexico tied with China as the US’s top trading partner  totaling US $113.2 billion each. Canada came in third place with US $112.9 billion after closing 2021 as the US’s first trading partner. US-Mexico trade continues to strengthen with double-digit increases in January (17.3 percent) and February (16.04 percent), compared to the same months last year.

•Mexico’s exports to the US grew 0.16 percent in February (totaling US $23.7 billion) after suffering a a 0.27 percent decline the previous month. Mexican imports from the US in February (US $32.5 billion) decreased by 2.17 percent compared to January. During the current year however, both Mexican exports to the US and Mexican imports from the US are up more than 16.9 percent and 16.5 percent respectively compared to 2021.

•For the month of February, Mexico was the top trade partner of the US while Canada was second (exports and imports combined). Total US-Mexico trade in February equaled US $56.3 billion (14.6% of total US trade), which was greater than Canada (US $56.2 billion) and China (US $53.9 billion). In February, China-US traded declined by 9.1% compared to the previous month. The top 5 US trade partners are still 1. Mexico, 2. China, 3. Canada, 4. Japan, and 5. Germany. 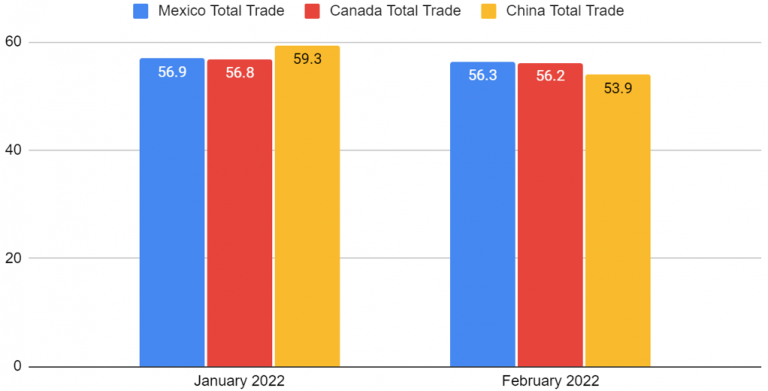 Mexico, Canada and China imports from the US 2022 (by month, US billion)

Mexico, Canada and China exports to the US, 2022 (by month, US billions) 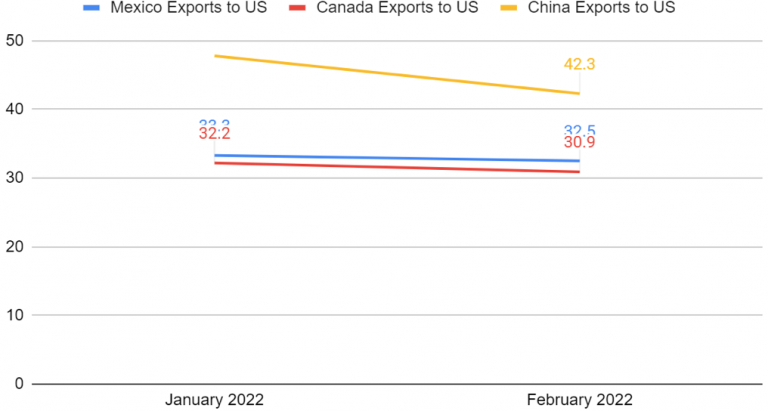 TAKEAWAY: Although February saw a decrease compared to January (and also compared to the end of 2021), total US trade with Mexico have increased significantly as compared to 2021. During the recent years, China usually began as the top US’s trading partner but ended the year in third place. It will be interesting to see how global supply-chain challenges along with the potential end of the Covid-19 pandemic could impact these trend in 2022.

Spotlight | Binational medical research: Where do the US & Mexico go from here?