Opinion | The Impact of the Legal Architecture on U.S.-Mexico Relations

The United States and Mexico have one of the most complex bilateral relationships. They share one of the largest land borders in the world covering 2,000 miles and linking four U.S. states and six Mexican states. On the U.S. side they include two of the largest states (Texas and California) and on the Mexican side they include four of the top ten states by GDP per capita (Nuevo Leon, Sonora, Baja California, and Coahuila). Mexico is the U.S.’s number one trading partner and close to 80 percent of Mexican exports go to the U.S market. Both countries also maintain a close energy interdependence. In 2019, Mexico became the number one destination of U.S. natural gas exported via pipelines, U.S. gasoline exports supply more than half of Mexico’s gasoline consumption, and Mexico is the U.S.’s second-largest import source of crude oil. Also, more than 61 percent of the U.S. Latinx population is of Mexican descent (Latinx accounted for 52 percent of all population growth in the U.S. and make up 18.4 percent of the total U.S. population). It is not surprising then that the number of Mexican Consulates in the U.S. (50) is close to the total number of Mexican Embassies around the globe (80).

In a few words, U.S.-Mexico relations have an impact on every fiber of American and Mexican lives: security, trade, citizenship, pollution, employment, immigration, cross-border crime, cultural engagement, consular protection, financial cooperation, information sharing, etc. The multidimensional character of the U.S.-Mexico relationship is unmatched, yet there are very few studies that have unpacked the institutional architecture that keeps it all together.

Instinct would dictate that the Embassies in Mexico City and Washington D.C. are the starting point for U.S-Mexico cooperation at any level and that both federal governments sign international treaties to face many common challenges. The reality on the ground, just like the relationship, is much more complex. Based on data collected through a freedom of information request filed in Mexico and through an analysis of international agreements disclosed by the U.S. Department of State, it is evident that the two countries have decided to base their everyday relationship primarily on a multitude of interinstitutional agreements (classified as memorandums of understanding or letters of intent) signed by different government agencies, consular officers, federal and state departments, state governors and city majors. According to the released data, Mexican and U.S. authorities at all levels of government have signed a total of 1,832 interinstitutional agreements between January 2000 and December 2020. In sum, Mexican and U.S. government officials have opted not to elevate the entire complexity of the bilateral relationship to an international treaty level that would have required the signatures of both Presidents and the ratification of both Congresses. 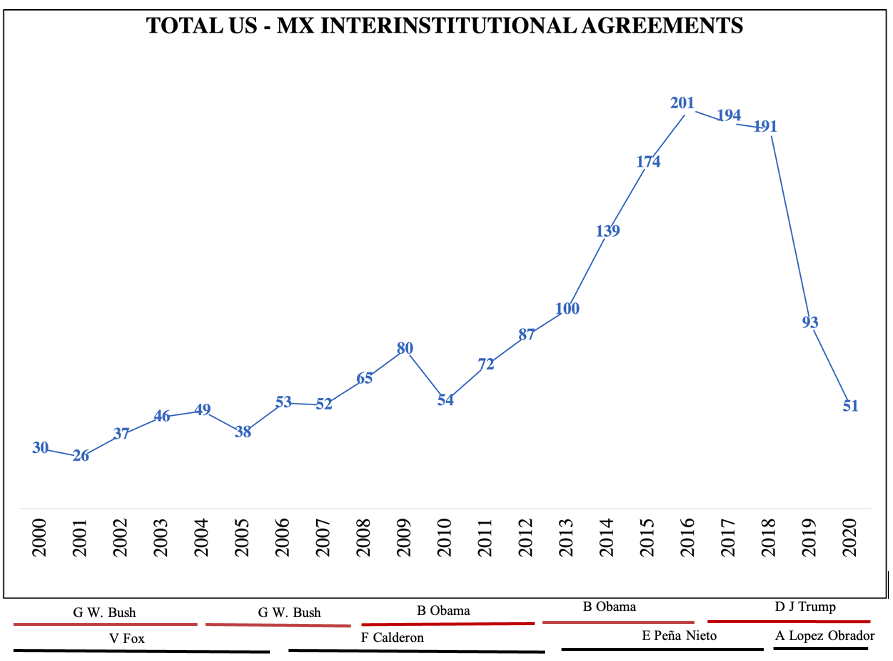 Among the multiple topics covered by these U.S.-Mexico interinstitutional agreements are: setting common standards and practices for energy markets, coordinating radio-frequency at the border for crime prevention, improving repatriation processes for Mexican nationals detained in the U.S., fostering economic and industrial policies along the Arizona-Sonora border, funding research in think tanks and state-run universities, creating joint protocols for the protection of migratory species and coping with common phytosanitary risks. 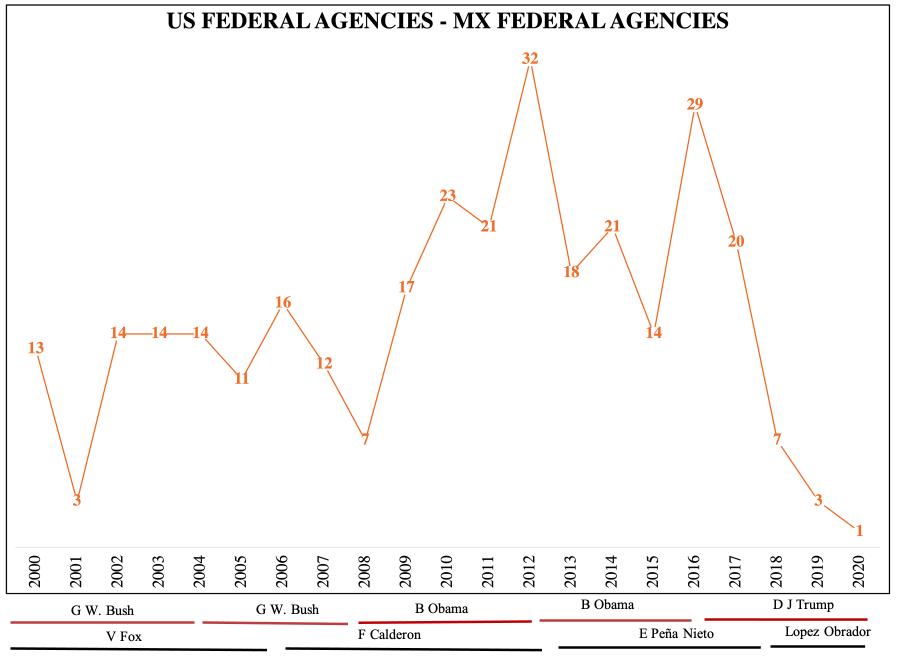 These agreements are the heart and soul of the institutional relationship between the U.S. and Mexico and tend to outlive the cycles of politics. Treaties are no longer the standard for the U.S. and Mexico to collaborate, regulate their interactions, and face common problems. The findings of this research set forth how State behavior is being driven by bureaucracies and their networks and also demonstrate how international law operates in practice. Studying and understanding these agreements is important for both nations not only because their operation impacts the life of the 17 million people who live along the U.S.-Mexico border, but for the future of the entire region. The findings of this new research will be presented on September 30 during a seminar hosted by the Center for Binational Institutions, a new initiative developed by the U.S.-Mexico Foundation.

* Guillermo J. Garcia-Sanchez is an Associate Professor at Texas A&M University School of Law. Professor Garcia Sanchez is also a Nonresident Fellow of the Coppel-Intuit Center for Binational Institutions at the U.S.-Mexico Foundation. The U.S.-Mexico Foundation is a binational non-profit organization dedicated to fostering bilateral cooperation and improving the understanding between the United States and Mexico by activating key people in the relationship that once were dormant. Twitter: @GJGarciaTAMU