TREND: In July, US-Mexico trade contracted 2.78% after hitting an all-time high last month. Mexico is still the US’s largest trade partner for the sixth month in a row this year and total year-to-date trade as of July 2021 is up 16.89% compared to July 2020. After months of Canada closing the gap with Mexico as the second largest trade partner by growing its participation as a top destination for US exports, last month was the first time in months that its percentage stayed the same, trailing Mexico by 0.1% of total US trade. China has been consistently losing its position as a top trade partner as their exports and imports from the US continue to contract.

•Mexico’s exports to the US in July (US $31.9 billion) declined 3.38% after hitting a record high in June. Mexican imports (US $23.6 billion) from the US also declined 1.96%, however both numbers are higher than in May 2021. Mexican imports from the US have oscillated between US $21 billion in February and US $24.1 billion in June. Both exports and imports are up more than 29.67% compared to July 2020 and doing considerably better than last year.

•Mexico is still the top trade partner of the US while Canada is the second. Total US-Mexico trade in 2021 equals US $375.5 billion or 14.7% of total US trade, which is still greater than Canada (US $372.8 billion) and China (US $352.8 billion). The top three countries maintained the same percent of total trade this month. 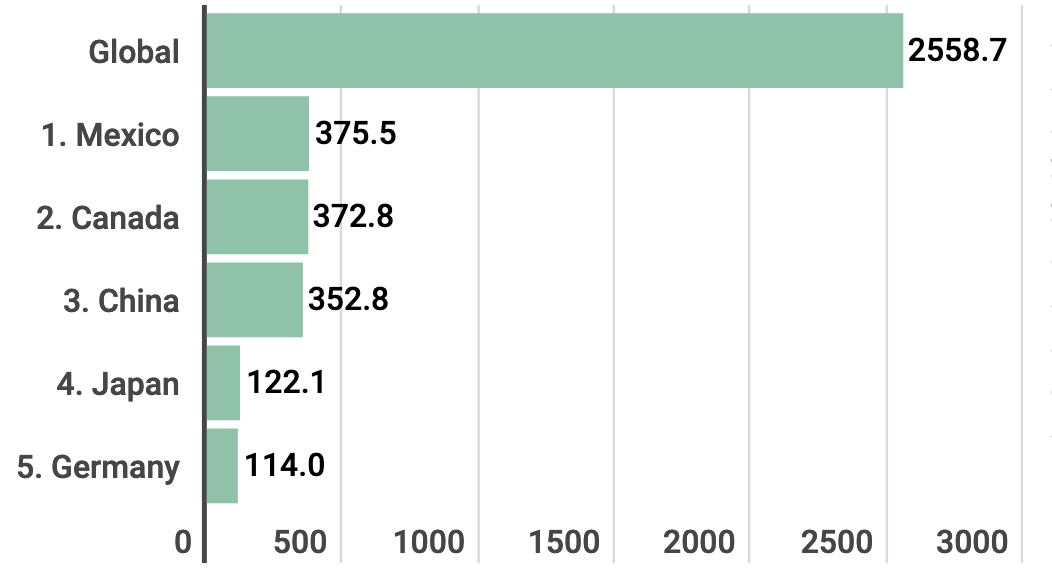 •As of June 2021, Mexico’s participation as the second top export destination for US products grew again this month compared to June 2021, from 15.9% to 16.0%. Canada’s participation as the leading importer of US goods stayed the same this month at 17.7%, ending it’s three month period of consistent growth. US exports to China decreased again for the fourth consecutive month from 8.8% in February to 8.4% in July. Both Mexico and Canada’s percent of total exports continue to be higher than in 2020.

•China is still the top source of US imports (17.2% of total) and its percentage stayed the same again this month. However, Chinese exports have continued to contract consistently from 19.1% in January to 17.2% in July. Mexico’s percent of total US imports decreased again this month (13.9%) by 0.1% while Canada’s stayed the same this month (12.6%) after a 0.2% increase in June. The US kept its imports from Canada and China while marginally decreasing imports from Mexico.

TAKEAWAY: US-Mexico trade decreased marginally compared to June 2021, when trade hit an all-time high, however Mexico has been maintaining its status as a key destination for US products. US-Canada trade stalled this month for the first time in months after consistently closing the gap with Mexico. Both Mexico and Canada are still benefiting from the US continuing trade tensions with China and are positioned to continue for years to come. As more companies become accustomed to the USMCA and new supply chain paradigms during the pandemic, both Mexico and Canada have a lot to gain from attracting companies to reshore supply chains from Asia. As the third wave has kept Covid-19 cases high in both Mexico and the US, and key manufacturing component shortages have affected manufacturing production in the automotive industry, the impact in US-Mexico trade will be felt in the coming months.