Spotlight | US-Mexico trade up but marginally lower than before pandemic

TREND: In May, Mexico was still the US’ largest trade partner for the fourth month in a row, leaving Canada behind by US $4.5 billion and China by US $14 billion. Total trade flows are up more than double compared to May 2020 but are marginally lower compared to May 2019 before the pandemic hit. Both Mexico and China lost 0.1 percentage points of total trade percentage while Canada grew by 0.1 points. Although US-China trade recovered marginally, it hasn’t hit the same levels as March 2021.

·Both exports and imports are up more than double compared to May 2020 when the pandemic cut trade by more than half. In May of last year, the total US-Mexico bilateral trade was US $25.3 billion, while in May 2021 was US $54.1 billion. 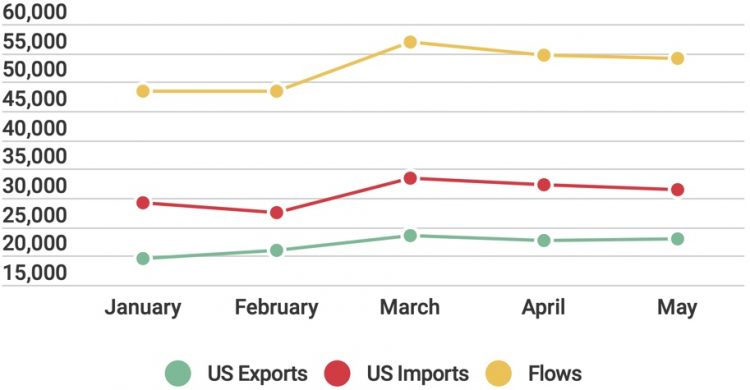 ·As of May 2021, Mexico again lost market share as a top export destination for US products compared to February 2020, from 16.1% to 15.8%. Canada’s participation as the leading importer of US goods stayed the same at 17.7%. US exports to China continued to decrease for the third month in a row from 8.8% in February to 8.5%. As a result, both Mexico’s and Canada’s percent of total exports are higher than 2020.

·China is still the top source of US imports (17.3% of total). However, its position decreased by 0.2% compared to last month and contracted for the second month in a row.   Mexico’s position also decreased 0.1% while Canada (12.4%) was the only country that stayed the same. The US increased its imports from other countries while decreasing its imports from China and Mexico. China’s market share in the US has continued to contract significantly from 19.1% in January to 17.3% in May.

·The top 5 US imports from Mexico in total value compared to April 2021 are (i) Vehicles, except Railway or Tramway (ii) Nuclear Reactors, Boilers, Machinery (iii) Electric Machinery (iv) Optic, Photo (v) Mineral Fuel, Oil. In May 2021, half of the US import categories from Mexico contracted compared to April 2021. The three categories that grew the most were: (i) Precious Stones, Metals, Pearls & Coins (11.5%), (ii) Raw Hides, Skins, Leathers & Furs (10.77%), and Mineral Products (8.96%).

·The top 5 US exports to Mexico compared to April 2021 in total value were (i) Electric Machinery (ii) Mineral Fuel, Oil, (iii) Nuclear Reactors, Boilers, Machinery, (iv) Vehicles, except Railway or Tramway, (v) Plastic and Articles Thereof. During the same period, half of US export categories to Mexico also grew. The three types of products with the most growth compared to April 2021 were: (i) Arms % Ammunition (19.84%), (ii) Mineral Products (15.06%), (iii) Precious Stones, Metals, Pearls & Coins(12.66%).

TAKEAWAY: Mexico and Canada are both still benefiting from the US continuing trade tensions with China, as both exports and imports continue to exhibit solid performances over the last couple of months. Canada has kept its position as the second-largest trade partner with growing exports and imports, partially because of its role as the most important market for US exports. Although US-Mexico trade contracted marginally compared to last month, trade during May 2021 is more than double what it was last year when the pandemic hit. As Mexico is starting to vaccinate its 30-39 population and US-China tensions continue to develop, we expect trade to continue to grow in the coming months and Mexico to continue its role as the US’ largest trade partner.

Opinion | Is there anything to celebrate in Mexico?