Spotlight | US-Mexico trade breaks record for any year in April

TREND: In April, Mexico maintained its position as the US’s largest trade partner for the third month in a row and broke an all-time high for April in any given year. Both US exports to Mexico and US imports from Mexico grew this month compared to April 2020 by 80.07% and 103.28%, respectively, averaging 93.03% in total flows. However, Mexican trade with the US contracted by 3.82% compared to last month. Mexico kept its total trade percentage while Canada and China contracted by 0.1% and 0.3%, respectively. Since February, US trade with China has continued to contract, which has benefited both Mexico and Canada.

• Mexico’s bilateral exports and imports with the US have decreased month-to-month for the first time in 2021, contracting 3.82% compared to March 2021. US imports from Mexico contracted 3.66%, while US exports to Mexico decreased by 4.04%. However, trade flows improved compared to April 2020, when the pandemic hit business the hardest last year. Both of these are all-time highs for April in any given year over the previous ten years.

• Total US-Mexico bilateral trade has started its projected growth during the second quarter -compared to last year-, as business contracted by more than 50% between March and May of last year. 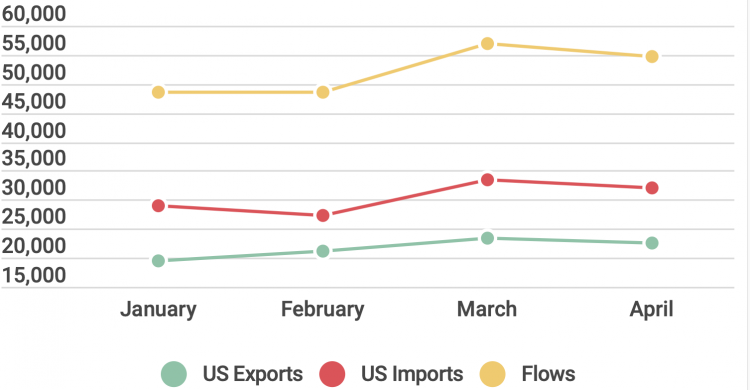 • As of April 2021, Mexico again lost its participation as a top export destination for US products compared to February 2020, from 16.1% to 15.8%. Canada’s participation as the leading importer of US goods stayed the same at 17.7%. US exports to China continued to decrease for the third month in a row from 8.8% in February to 8.5%. As a result, both China’s and Canada’s percent of total exports are lower than 2020.

• US imports from China contracted again in April, after a slight recovery in March. China is still the top source of US imports (17.5% of total). However, its position decreased by 0.3% compared to last month. Mexico (14.1%) remained the same while Canada (12.4%) contracted by one percentage point. The US increased its imports from other countries while decreasing its imports from China. China’s market share in the US has continued to contract significantly from 19.1% in January to 17.% in April.

• In April 2021, half of the US import categories from Mexico contracted compared to March 2021. The three categories that improved the most were: (i) Vegetable products (22.59%), (ii) Mineral products (11.38%), and base metals (27.61%). In addition, the top 5 US imports from Mexico with the most growth this year compared to 2020 changed this month: (i) cotton, (ii)ships, boats, and floating structures, (iii) food industry residues & waste (iv) albuminoidal substitute, modified starch; and gue enzymes (v) tobacco and manufactured tobacco substitutes.

• During the same period, half of US export categories to Mexico also grew. The three types of products with the most growth compared to March 2021 were: (i) works of art and antiques (269.29%), (ii) precious stones, metals, pearls & coins (37.48%), (iii) raw hides, skins, leathers & furs (16.44%). The top 5 US exports to Mexico compared to 2020 were (i) fur skins and artificial fur, (ii) ships, boats, and floating structures, (iii) live animals, (iv) umbrellas, walking sticks, riding crops, (v) fertilizers,It is important to note that both of these categories measure percent growth rather than total monetary value change.

TAKEAWAY: As Mexico’s election cycle has come to an end, Mexico is still the US’ largest trade partner and most likely will stay this way in the short term considering President Biden’s policies and trade tensions with China. Canada also kept its position as the second-largest trade partner, keeping China at a close third. Although US-Mexico trade contracted marginally compared to last month, it still represents a record high for any year in April and a growth of almost 100% compared to the previous year. In the next three months, we expect trade growth of over 100% compared to last year as the pandemic hit the hardest between March and June 2020. In addition, the donation of American Johnson & Johnson vaccines applied in the Mexican border cities will help shorten the time to reopen the border, which will have a positive impact on tourism recovery at the border and even further trade growth in the coming months.

* Spotlight by José Burnes, AmCham/Mexico’s Trade & Investment Center Manager. The American Chamber of Commerce of Mexico (AmCham/Mexico) seeks to facilitate commercial integration between Mexico and the US, build a favorable business environment, and contribute with proposals to consolidate Mexico’s competitiveness and development as a top destination for American investment. By connecting companies and sharing trends and market intelligence, its Trade & Investment Center boosts cross-border business. Twitter: @amchammexico